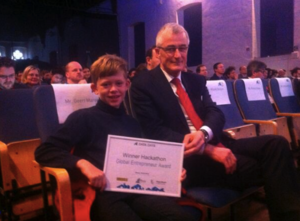 ‘The hardest part about making the app,’ William said, ‘was getting the data.  When I first asked for Open Data at my Town Hall the lady really didn’t understand what I was talking about.’  William and Alex approached public administrators in York, Maine and Holyoke, Massachusetts USA and Cape Town, South Africa to ask for data about upcoming events in the cities.  ‘I had to keep repeating that I needed the data in an excel spreadsheet,’ Alex commented, ‘because the person I was talking to kept telling me to go to the website.’ The boys used guidelines created by Citadel-on-the-Move to help the public administrators they spoke with to understand what Open Data is all about, and how valuable it can be to their cities.  After weeks of going back and forth until they finally got the data they needed in the format they needed, the boys were then able to use the tools created by Citadel-on-the-Move to create a mobile App that combines data from York, Holyoke and Cape Town with data provided by Citadel partner cities Athens, Greece and Gent, Belgium.

‘’Citadel-on-the-Move set out to make it easier for people to use open data to create applications that would work across city borders,’’ Geert Mareels, ICT Manager for the Flemish eGovernment Authority and Citadel Project Coordinator.  ‘’We never dreamed when we set out that our tools would enable a 9 year old to create an app that works across 3 continents.  Let alone in 5 minutes!!’’

The boys received their award at DataDays 2104 – a 3 day conference sponsored by Citadel-on-the-Move that features Open Data developments from around the world. They plan to donate their prize money to help a school in a South African township in Cape Town buy computers. “These young entrepreneurs holds the future in their hands’ said Gerald Santucci, Head of Unit ‘Knowledge Sharing’ at DG Connect in the European Commission.  ‘’Citadel on the Move is helping talented young people like William and Alex bring technology to serve mankind.’’

1. Citadel-on-the-Move is an EU funded CIP-IST project which aims to make it easier to open and use data. The Linked Organisation of Local Authorities (LOLA) represents local government from around the world.